Overweight And Obesity Among Malaysians

Following is a news release by the Malaysian Health Ministry. I found it through Warkah.com.

The Minister pointed out that the prevalence of adult obesity in Malaysia from 1996-2006 had more than tripled with four out of every 10 Malaysians above 18 years of age are now being either overweight or obese.

Even more worrying is the fact that this group is at high risk of contracting serious disorders like diabetes, hypertension and high blood cholesterol.

Other than asking people to exercise more and cut down on food, there should also be a change in the mindset?

My Comment: I don’t think its a problem of mindset. People want to be healthy. They just dont know how. It’s a problem of knowledge and education from a young age.

According to M.Manivannan, a sportsman and the national kabbadi coach, the people should constantly be reminded that overweight and obesity has serious repercussions to one’s health in the long term.

My Comment: Who? hahahah…..people know the repercussions lah. Just like people know that drugs and smoking is bad. Awareness is NOT the problem!

This is where the media especially the television should be more proactive in educating the public on healthy eating and living, and not just remind the public repeatedly that taking good care of your health is important.

“The media should better educate the public on the consumption of healthy food and a healthy lifestyle rather than just airing advertisements,” said Manivannan who is the Sukma 2008 national technical delegate for kabbadi.

This slowly can help change the people’s lifestyle for the better.

Educationist Selamat Ahmad Kamal told Bernama that media could inform the public on the recommended daily allowance (RDA) for the body. Through this, Selamat said the public could gauge for themselves their daily requirement of sugar, fat and carbohydrates.

My Comment: Yes I agree. Individuals should know AND understand their own needs and requirements for food.

“But I am afraid the media will make it too technical and the public will not understand. I hope the media can work with the Health Ministry to come up with short statements on how many spoons of sugar a normal body needs daily.

My Comment: I personally have tried to work with our beloved Kementerian Kesihatan numerous times but they are always “too busy”. Faham-faham sendiri lah kot.

“As we are aware, the Malaysian Adult Nutrition Survey in 2003 revealed that only about 40 percent of adults consumed green vegetables on a daily basis and the television can play a good role here by encouraging the public to eat more of these stuff and tell us the benefits of doing so during the prime time news break when most of us will be having dinner,” he added.

“Of course they must tell us how much sugar is in the `teh tarik’ and how many glasses of `teh tarik’ we can consume in a day without fearing the reaction from the teh tarik sellers,” said the former Headmaster of a school in Mentakab, Pahang.

My Comment: Just wait til I launch my cekodok.com. It’ll just blow you away! hahaha.

Selamat also told Bernama that the public had to be told that over indulgence in fast food and carbonated drinks too can be disastrous to health.

“I congratulate the former health minister Datuk Seri Chua Soi Lek for being bold enough to advice the government to stop certain advertisements deemed detrimental to the public’s health if consumed too much.”

Exercise A Way of Life

Overweight and obesity have increased but how about the physical activities to burn the extra calories?

Heavy machinery foreman Oh Ce Mai believes that exercise should be a way of life.

As many of us will give all sorts of excuse to avoid exerting our body, our daily routines can serve as good exercise regimes especially the walking that we do every day.

To encourage people to walk more, he suggested that the local councils should provide safe and comfortable pedestrian lanes.

“I would like to see more lanes created for walking in towns especially near commercial centres, bus stops and schools. At present there is little or no provision for such lanes covered with tree canopy to encourage people to walk to or from the bus stop, offices and the schools.

“Today we see many school children being obese or overweight as they do not walk much because their parents feel it is too dangerous for their children to walk on the roads,” said Oh, who maintains a healthy body.

Meanwhile, retired army personnel Taharin Abdul Shukor said how are we to encourage people to exercise when fields for recreational activities are out of bounds for the public or taken over for development.

“There are cases where the fields have been fenced up or reserved for elite groups and this saddens me.

“A good example will be a field in my hometown in Temerloh, Pahang. Today a mini stadium is on the field and the public has no free access,” lamented Taharin.

My Comment: Agreed! Sports facilities in this country are very very sad! I would love to play football somewhere in my neighborhood but no pitches around. Thank god for futsal! Check out my sports development proposal for our KBS.

Taharin urged the Youth and Sports Ministry and the local council to look into the matter and to open up all fields like the Temerloh Mini Stadium to the public.

At the end of the day, it is all in the mindset. All we need to do is treat our daily physical activities as exercise regime and keep up with healthy eating habits.

Abs or Water? Getting rid of excess water?

WWeight Loss
Are you a Malaysian wanting to lose weight weight? Do you think it is impossible to lose those extra pounds based on our local food? Think again. 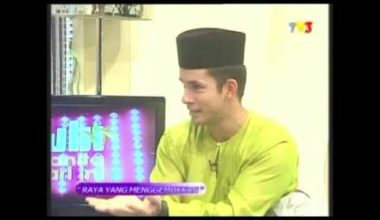