I have been overweight all my life since I was 9 specifically.

I was always battling weight issues since I could remember. When I was 17, I weighed 82kg and in my uni days, the lightest I’ve been was 70kg. I’ve always dreamt of being thin and being able to wear all those pretty normal size clothes. Previously, I could only shop for plus-size clothing and did not even own a pair of jeans because I could not bear seeing how humongous my thighs look in them.

I did try to diet and exercise but often failed to stick to them. I had also avoided stepping on the weighing scale for a longggg time so that I could continue living in denial. Only during Raya last year did something hit me. All of my clothes felt as tight as ever! And I was ashamed to look at the photographs of myself. I realized if I didn’t do something about my weight now, I might never be healthy. I didn’t want to suffer any illnesses because of my weight. I finally took charge and stepped on the weighing scale and my heart literally fell when I saw the number 83! I was 23 years old and weighed a whopping 83kg.

My heart literally fell when I saw the number 83kg.

…Maybe I was a little drastic but drastic times called for drastic measures haha! …

I always made sure that I was eating healthily (taking fruits and veggies as snacks) and also that I was not starving myself. The trick is to take smaller portions of food 4 to 5 times a day rather than just 3 big meals per day. My number one weakness was that I was a sweet tooth! I absolutely LOVE desserts! So cutting down on all those sweet delicacies was a really tough challenge for me. Throughout my “battle”, my weekly reward was always a 3/4 cup of frozen yogurt. No chocs, cakes or etc.

I had never been able to commit to exercising! But I forced myself to cycle or jog every single day (min: 20 mins, max: 3 hours) until I was addicted to sweating it out. I also started to lift weights and now I can proudly say that I love working out! I cycle, jog, swim, or jump rope whenever I can squeeze in time. After a good workout, your body automatically feels fresh and you will definitely feel good about yourself.

To motivate me, I bought this pretty dress in size 8 .

Previously, I could only fit in size 16/18 items of clothing. So, I was determined to fit in that dress. Slowly throughout the months, I could slowly zip up the dress until I finally fit in it! Going down from a size 16/18 to a size 8 is definitely a huge achievement for me. And of course, I finally bought myself a pair of jeans 😉

Green Tea: My Only Supplement

A lot of my friends did not believe me when I told them that I didn’t take any supplements whatsoever to lose weight. The only “supplement” and the best friend for me was GREEN TEA. I drink it every day! It’s not only good for losing and maintaining weight but it also can reduce the risk of diabetes, cancer, high cholesterol, and high blood pressure.

So, I started my “battle” in October 2011 where I weighed 83kg and reached my target weight (60kg) in February 2012. I was already so happy and in early April, I weighed 56kg and able to maintain the same until today. My target weight now is 50kg. My goal is not to be stick thin but to be healthy and fit. I guess you can indulge once in a while but not ALL the time and always practice a healthy lifestyle and exercise is key!

It was definitely a super tough journey but I have never ever felt better. Trust me, if I can do it, ANYONE CAN! … 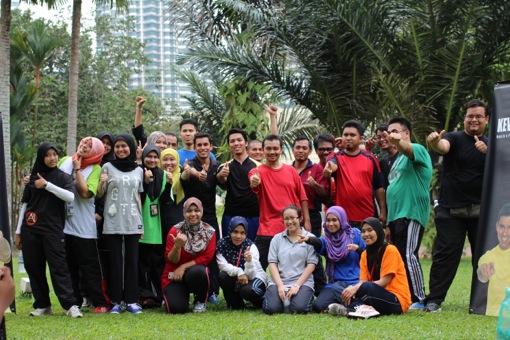