Apologies for not having blogged in a while….sibuk I tell you. Sibuk buat apa? Hahaha tu la…macam-macam. Lets see
0
Shares
0
0
0
0

Hey everyone…..
Apologies for not having blogged in a while….sibuk I tell you. Sibuk buat apa? Hahaha tu la…macam-macam. Lets see

Been doing various interviews for both print and TV world. For those you have missed it (i know da shows are very early in the morning), I’ll try to post their interviews once I dapat the copies from the TV stations. Where did I appear?

Also been busy meeting various people from all over the place to work on co-promotions.

Am very happy to say that thanks to the book, my product…..lots of new opp have arised. That was the idea

Preparing for my upcoming Seminars

Enough said 🙂 Have you signed up?

Conducted a 1/2 Day on “Corporate Grooming/Image”

Had the honor to be invited by u-link to conduct a half-day seminar on Corporate Grooming/Image @ Putrajaya’s IOI Resort.
If you interested to look at some of my talks/seminars, go here

Oh an yeah was sick haritu over the Chinese New Year….sakit demam. Hahahah funny how people always say “Cikgu Fitness pun boleh sakit ke”. No matter how fit you are pun, nuttin you can do against the attack of virus’.

Is It True Fruits Won't Let You Gain Weight? 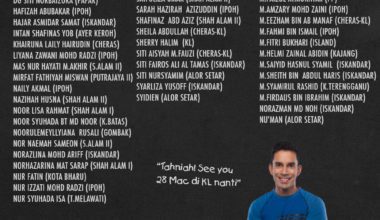