Total
0
Shares
0
0
0
Following is M. Zulkifli’s weight loss story that he was kind enough to share. Original post and story can be viewed on his personal website – http://www.mzulkifli.com/. Zulkifli is an Ex magistrate, ex editor of FHM, NM and MM, lyricist, co-author of some humour book published in Brunei(!), frontman of the now defunct Blitz band, Liverpool supporter, pop culture junkie, screenwriter, TV host and a new media man.

How? Well, through bloody hard work, that’s how.

But honestly, I thought it was an impossible task doing it on my own without the help of one of those fat-sucking treatments with a celebrity face on it. Oh yes, I did consider paying a bunch of money to do exactly that, but I never made the phone call, which has proved to be the right decision. (Also, I can’t imagine going into one of the outlets and saying, "can flatten my tummy ah?")

I’ve also had a few false starts these past couple of years. In late 2010, I decided to basically cut down on my meals, and it did work for a while. I also bought the exercise bike and treadmill, but those became very expensive clothes hangers after a few months.

But the road to seriously losing weight started approximately one year ago when I took up running. I’ve blogged about it, so clickHERE to read about exactly why I run.

I actually didn’t put any target on the amount of weight I wanted to lose or even the time frame. I wanted to get into shape without that extra pressure. And as you know, I have fallen in love with running during the process.

But after a few months, I had gone down 5kgs to 87.5. Then it became 86. All this through running and cutting down on all the makan a little. No supplements or personal training.

Then came the hardest part; for the longest time, I simply couldn’t dip below the 85kgs barrier. It would almost be there, but for some reason, it would go up again. This despite all the extra mileage I was putting into my running. I honestly thought it couldn’t be done.

But a couple of months ago, I started going to the gym on a regular basis. Ah yes, the gym. It’s been ages since I joined a proper club. Even when I worked out, I basically used the mini gym set I have at home comprising a few dumbbells, a barbell with weights and a bench.

But with a proper gym, I was instantly motivated to zap the fat and pile on the muscle. Chewah.

And guess what? I got on the weighing machine yesterday and saw that I have lost 10kgs since April last year. At 82.5kgs, I am still 3-4kgs off my ideal body weight, but I do feel great.

My Exercise Routine, Diet and Supplements

And here’s my current routine and eating habit: I take one type of supplement from GNC, workout at the gym three times a week (30-40mins of weights & 25mins of cardio), run three times a week (3-6km on average), stay away from roti canai and nasi lemak, and eat healthier snacks. Support from the fam is also crucial. And yes, I read a lot of health magazines!

The downside? I need new clothes! Jeans, shirts, t-shirts, the works. And the steak houses are rather upset with me now. Haha.

10kgs lost might not be a big deal to some of you out there, but more than anything else, it proved to me that the impossible could definitely be, doable 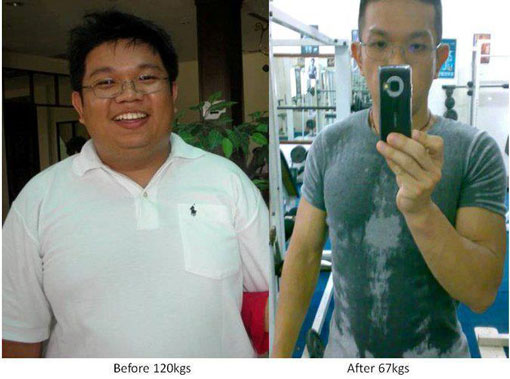 Aravind Teoh: Getting ripped from 120kg to 67kg in less than 6 months