The remarkable story of how David Smith lost more than 400 pounds in just 26 months without gastric bypass surgery
0
Shares
0
0
0
0
This article was taken from MSNBC.com – Looking for love, 650-pound virgin loses 410.

He was enormously obese — a lost soul with no friends and no life who had given up on himself and on life.
David Smith even hatched a plan to end it. He would get an inflatable swimming pool, and he would take it to a remote spot in the Arizona desert. He would fill it with gasoline, get in, and light a match. It would be a horrific and painful way to die, but that’s what Smith thought he deserved.

And the best thing about it would be that the fire would consume his 650-pound body. When it had done his work, there would be nothing left to make fun of anymore.

It is hard to believe that the David Smith who tells this story is the same hunky man who sat down with TODAY’s Matt Lauer Friday in New York. Smiling and confident, he’s cut and ripped, a certified personal trainer with a body that’s no longer to die in a blaze of glory for. He has a future that never seemed possible — and a past that seemed to have belonged to someone else.

“It’s a different person,” Smith told Lauer after watching a video that showed the gelatinous blob he used to be. “It’s not me anymore.”

The remarkable story of how Smith lost more than 400 pounds in just 26 months without gastric bypass surgery is the subject of a TLC documentary that premieres Sunday, July 12. It’s called “The 650-pound Virgin,” and it follows Smith’s journey from a suicidal and friendless loner who never left his house to a new life as an inspiration to everybody who has battled obesity.

The story’s not over. Smith, now 32, would not say directly if he is still a virgin, but he admitted that he is still fighting to get over his shyness around women and his fear of rejection.

“It’s like night and day. I’ve gone from being a laughingstock to having girls make googly eyes at me,” he said. But responding to those looks is still a challenge. “I still have to muster up the courage to talk to girls,” he said.

The remarkable transformation in Smith’s life began in 2003, when he was considering suicide. Somewhere deep down, he discovered that he still harbored a hope that he could transform himself. He decided to lose weight.
Smith rejected bypass surgery as too risky. He didn’t want to die on the operating table and have his obese remains mocked by the surgeons who had been trying to save his life.

Once a whopping 650 pounds, David Smith showed his amazingly transformed self on TODAY.
The remaining alternative was to learn to eat properly and exercise the weight off. And, he decided, he would renounce his terror of being seen in public by making his journey the subject of a documentary.

“I decided that the best way to get over my fear was to destroy it … and the best way to be seen is on television,” he wrote. So he contacted KTVK, a local television station that had a feature hosted by fitness and nutrition guru Chris Powell. After some initial hesitation, Powell took Smith on.
Powell waited several weeks before contacting Smith. He had doubts about whether he could help, but the more he looked at the pictures Smith had sent, the more he felt he had to meet Smith.

Using a nutritional program and what he calls a transformational approach that he devised himself and now sells — the STAX System — Powell went to work. When they began, Smith couldn’t walk 500 feet and couldn’t fit in a car.

Powell told Lauer he alternated diet plans. Not wanting to tell Smith he couldn’t ever eat ice cream, pizza and the other calorie-laden foods he loved, Powell told his student he would diet strictly one day, then reward himself the next. “It was baby steps,” the trainer explained.

The baby steps became giant strides. The weight melted off — a phenomenal average of more than 15 pounds a month. By 2007, just 26 months after he decided to transform himself and his life, Smith had lost 410 pounds from a starting weight of 650.

The weight loss left behind great folds and bags of excess skin that had to be removed over the course of more than a year in a series of three operations. At last count, surgeons had removed some 30 pounds of excess skin, and, Smith said, he still needs one or two more operations.

In a biographical sketch Smith wrote, he says his problems began after his family moved to the Phoenix area when he was 7 and was sexually molested by his best friend. Unable to deal with the experience, he cut himself off from everyone and found solace in eating. A large child to begin with, he quickly became not just one of the tallest kids in his class, but also the fattest.

“I didn’t want to be hurt again,” he wrote. “I was full of shame.”
But his desire invited only more abuse. He became a target of bullies, who would gather gangs of kids to see if they could beat him up.

“I have been spit on; I have had dirt clots, rocks, bolts, basketballs, books, even feces among other things thrown at me,” he wrote. “I started to hate people. Nobody wanted to be my friend. I didn’t even want friends anymore, I just wanted to be left alone.”

The physical abuse ended in high school, but the emotional abuse continued. It got so bad, that Smith dropped out at the age of 17. He didn’t want to take it anymore.

And then he got hit with another emotional trauma. His mother, the only person he allowed himself to show any emotion to, was diagnosed with non-Hodgkin’s lymphoma. She fought the disease for five years, but in the end it took her life.

“It hit me hard,” he wrote. “The first month, I hardly ate anything, but after the first month I was an eating machine. I didn’t care about anything. I just wanted to get my fix and be left alone.”

That’s when he stopped leaving his family’s home, stopped interacting with others, and started to think of ways to end it all.

Fortunately, he made one giant effort to break out of his personal hell, and Powell responded. They’re best friends and roommates now, and fellow fitness trainers. Helping others to do the same thing he did is Smith’s way of paying back the gift he’s received.

Now, all that’s left is to meet a girl and have children who won’t grow up in the emotional desert he inhabited for most of his life.

Asked after the show when he thinks that could happen, he said, “I’m just putting the pieces together — and hopefully a girl will be one of the pieces.” 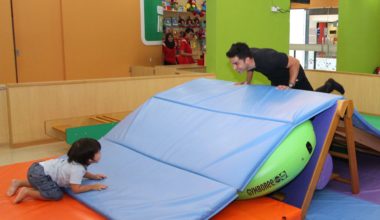